A cup of tea solves everything! 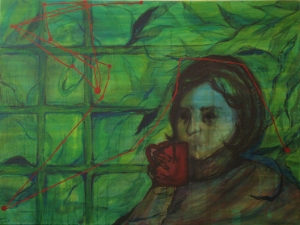 Reminiscing over a cup of tea… a part of me rooted everywhere I lived, merging with the background… green like the colour of the algae, leaves like the vine trailing any place it grows… I wanted a faded, old look to this work- acrylics, coloured pencils, indian ink; on canvas, 40″x30″.

Tea, such an integral part of both India and Britain… I’m not a heavy tea drinker, started drinking a little more when moved to London- the great English tea, so much better than ‘masaledar’ Indian tea! 😉 YES to tea in big mugs and a big NO to dainty little cups with saucers!! Even after supper, there’s always time for a hot cuppa! Tea always reminds me of the 1999 film, ‘East is East’; story about a British-Asian family. Om Puri playing the head of the family, a Pakistani straddling between two cultures with his English wife… after an argument they would always patch up over a cup of tea: she would ask, “will you have some tea?” and he would always say, “half a cup”. 🙂

The amount of time I spend ‘thinking’ with a mug in hands… and it was over tea, I thought of all the places I’ve lived in, thanks to my dad’s transferable job. I must have changed about 8-9 schools, made so many friends in various places. Did I ever feel uprooted? There were times my sister and I felt that by the time we made good friends, it was time for us to move on but then we looked forward to new schools and new friends… the “old” friends were always in touch through good ol’ pen and paper letters and postcards!! 🙂 (Something I miss terribly today, I do make an effort to paint hand made cards for friends and pen letters sometimes, makes it so personal.) I strongly believe of not living at one place forever. Some might say you don’t get a sense of community if you move too often and there is nothing to latch onto… to a certain extent maybe, but I feel when you move to a new place, you become part of a new community, meet new people, adjust to a new lifestyle… and yet one is rooted to the previous community through people, memories, smells… rather be a wanderer than a frog in a pond!!

The title of this work and post is borrowed from a ‘facebook’ group, created by Christina Georgotas.

PS: Another painting on the same thought process: A stubborn knot, painted with acrylics and thread sewn over, on canvas, 18″x14″. 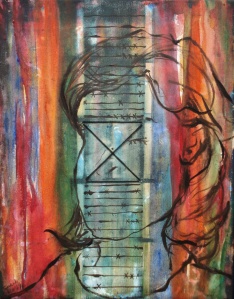